Being primarily self employed is both delightful and maddeningly frustrating.

The delightful part is being able to do work at breweries, or outdoors, or having sweet and fuzzy work partners. 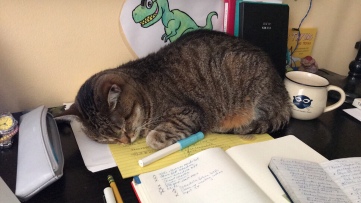 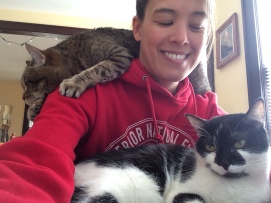 But it is also maddeningly frustrating when I want to be productive, and I set out to be successful and then just keep getting in my own way, and there is no one to blame but myself.

In being self employed, I feel there are two types of tasks.  The first are the immediately necessary that keep you existing at all; such as doing the client work I’ve already been paid to do, or doing the bookkeeping and paying the bills.  These are like chores, and while I don’t always love them, I am confident I’ll get them done.

The second are the entirely optional that create improvements and advancements.  These take personal drive and creative effort.  Sometimes they are big nebulous projects.  Sometimes they are small but take confronting vulnerability, fear, and are full of emotional effort.  Even if they are easy tasks, they are still by their nature, optional.

So a couple weeks ago I was sort of working, sort of procrastinating when clearing a long stagnant pile from my desk. Underneath was a book lent to me by a friend over a year ago, that I hadn’t ever opened. Twyla Tharp – The Creative Habit

If I wasn’t procrastinating I would have properly placed it in the “outgoing” pile by the door. Instead I opened it and read the 2nd chapter (’cause starting at the beginning would have been far too disciplined for my mood). 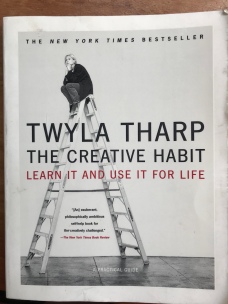 It was delightful and inspiring. Just what I needed.

I’ve now read that chapter at least twice. I had to distill it into something that could guide me. These were my golden nuggets:

Most rituals are simple tasks such as Twyla’s getting into a taxicab, or a writer’s habit of dusting, or a musician’s walk… calling these things rituals “glorifies a mundane act… Thinking of it as a ritual has a transforming effect on the activity. Turning it into a ritual eliminates the question – Why am I doing this?”

“It’s vital to establish some rituals – automatic but decisive patters of behavior — at the beginning of the creative process, when you are most at peril of turning back, chickening out, giving up, or going the wrong way.”

“Distractions and fears… They’re the habitual demons that invade the launch of every project. No one starts a creative endeavor without a certain amount of fear…”

Good rituals “arm us with confidence and self-reliance.”

“Athletes know the power of a triggering ritual… By making the start of the sequence automatic, they replace doubt and fear with comfort and routine.”

“All preferred working states, no matter how eccentric, have one thing in common: When you enter into them they impel you to get started.”
“A daily ceremony…” that makes for “a predictable, repeatable kick-start.”
It needs to be easy “…a working environment where the prospect of wrestling with your muse doesn’t scare you, doesn’t shut you down.”

With that, I set about thinking what could be my ritual of preparation for working on my continuous creative project: Zest Ed.

So I’m going to try this routine:

It’s the last part that is the critical triggering ritual.

I’ve tried it for three weeks now, and so far it’s helping.

This entry was posted in Enterprise and tagged entrepreneur, self employed, Type 2 Fun, Zest Ed. Bookmark the permalink.