Something Magical: My Watershed Biking Moment

Almost as soon as I finalized registration I got a sinking sense of dread, “Oh, no. What have I gotten myself into?” I had selected the Trinona international distance triathlon because it had gotten a great reputation and I felt I ought to experience it. The bike course has a mile of 10% grade “hill” that is legendary as being a favorite of Greg Lemond, Tour de France champion. It has its own time trial: the Battle of The Bluff. None of this information seemed to mean anything to me until after my non-refundable registration. A 10% grade had been just a number; then I visualized the only hills of that grade I knew. There are few in the city, and they seem impossibly steep but mercifully short.

I could only think “I suck at biking!” Despite six years of gradual improvement from petrified to competent I couldn’t end the “I’m a bad biker” story.

After my initial shock I gamely figured it would be a good challenge. I had plenty of time to get ready. Once the snow was gone I’d attack the biking. In April when it just kept snowing that sinking sense of dread snuck right back. By mid May I was finally getting in some miles. I was not encouraged. I couldn’t convince myself that it was fun or that I was fast. The only explanation I had was that I was a bad biker.

Meanwhile the climb had grown in my mind. It had been pushed upwards as my fear and doubt collided tectonically with my actual training. The bluffs of Winona had turned into the mountains of Mordor.

I left Saturday afternoon with dread and determination; I set out to do what I had promised to do. I felt about as small as a hobbit. 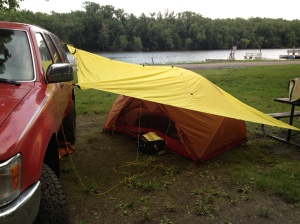 I slept fitfully through storms and awoke at 5am to chilly drizzle.

I went though the motions of race morning, countering rising anxiety with a passive acceptance of my fate. At 8:42 I plunged into the lake, flooded with relief, finally getting this over with.

Out of the water and on to the bike, I had twelve miles of rolling hills to approach the beast. It was a sharp left turn, smack into the face of the climb.

A friend had given me two key pieces of advice. She told me to get into my easiest gears early and “When you think it’s about done there is another short steep section that you can’t see.” I geared down immediately, before I even felt the hill and I decided not to look for the crest. Strangely I was not alone. Normally in triathlons people get very spread out on the bike. There is also a no drafting rule in which you must be three bike lengths apart. The dramatic slowing effect of the hill was acting as a bottleneck. I was going to have company in my misery.  Then something magical happened.

“I’ve got this. Piece of cake. I could do this forever.” The words just came. It was absurd. I should have fallen over laughing. Instead, I kept my head down because it didn’t matter where I was or how much was left. I listened to my crazy self state as fact, “Breathing easy, legs feel fine, I could do this forever.” Passing people and seeing racers walking their bikes should have snapped me out of my trance, but instead I heard, “I’m a great pacer, I could do this all day.” It went on and on, and then it was over.

The open flat farm land was beautiful, the descent was safe and thrilling. I was elated to finally get to the run. After finishing I ate my post race sandwich in the rain and waited around for the door prizes I never win.

I was entirely surprised when I was called to the podium for second in my age group.

I was even more pleased with my times.

I am most impressed and proud of my response to the hill. I’m still processing what happened. Usually my confidence and positive self-talk through challenges has come directly from nailing my training. That was not the case here. I think all my past racing experience, and all the coaching I’ve received, and all the coaching I’ve done, came to the rescue. The “I’m a bad biker” self got smacked down and instead of fighting for another stand it just sat there while this new “I can do this” self climbed right over it. The Bad Biker Kym got so soundly beaten it seems ludicrous to revive it.

Next in the Superiorman storyline: I blame the squirrel!

This entry was posted in Fitness and tagged biking, racing, triathlon. Bookmark the permalink.

11 Responses to Something Magical: My Watershed Biking Moment