Some things feel slightly embarrassing to learn.  Sometimes they are things I teach, things I know and somehow I still get to relearn them the hard way.  Some things I was surprised it took me this long to really learn.  This was a year of racing for me which gave me a lot of opportunity to learn.

Will snapped this of me coming home after the Polar Dash. Don’t I look happy?

September 7 – Square Lake Triathlon was my “A” race of 2012 after foot surgery in April.
November 22 – Turkey Trot 5k after a month paddling and portaging.
January 1 2013 – Polar Dash, my first 1/2 marathon, temps in the single digits, Brrrrrr.
March 16 – Get Lucky 1/2 marathon.
April 7 – YWCA Indoor Tri .
May 19 – Land Between the Lakes Triathlon in Albert Lee. There was ice on the lakes until the end of April, it was cold.
June 9 – Trinona Triathlon international distance in Winona. It led to my watershed biking moment.
July 21 – Heart of the Lakes long course in Annandale. I didn’t finish. I was sick and I had a bike malfunction.

Here are some things I’ve learned along the way.

1 – Plan to forget something.

It was dawn on my way to a Sunday race.  The rolling grasses of the midwest were beautiful in the morning mist but I could hardly notice.  My car was running on fumes and I had a dangerously growing need for a toilet.  I pulled over to one gas station to find it closed in every way.  Thankfully the next one was open.  Once I gratefully relieved myself I realized I forgot my wallet.  I had no way to pay for the gas.  I did make it to the race, despite having forgotten to fill the tank on Saturday or bring my wallet.  I’ve learned to plan on something going wrong.  This has saved me considerable headache this year.

Me with my necklace, medal, and bubbly.

I crossed the finish line and took my time walking up to the handsome shirtless men handing out tiny pink bags with the jewelry box inside.  Shortly thereafter I stepped aside to open my box and take out the necklace.   I had registered for the Team Ortho series of running races exactly because of all the “free” stuff, aka “swag”, you get.  I was at Women’s Rock exactly because I heard about the shirtless men and the bubbly at the end.  From this race I would end up with a really nice jacket, a finishers medal, a finishers necklace, and the bubbly in a real glass I got to keep.  A woman and I struck up a conversation about races, comparing notes.  My race numbers from Superior Man Tri were still stuck on and I was raving about it, and then about the YWCA Women’s Tri.  She kept asking “What do you get?” I kept brushing the question aside saying what a great experience these races were.  It’s not always about the stuff.  The Team Ortho races are great just because of their convenient location and the free stuff.  They are incredibly boring races otherwise.  Register for races for the experience, not for the added clutter.

Yeah, I knew this one, but I had to learn it again.  I spent all season training for the 70.3 miles of triathlon.  When I went to do Square Lake Tri two weeks after Superior Man somehow I thought I’d get a personal record without even trying.  Nope.  I was slower in 2013 than I was in 2012.  It wasn’t hard, but I just couldn’t go any faster.  I trained for a 6 hour race, so why did I think I would race better at 2 hours? Training distance matters. 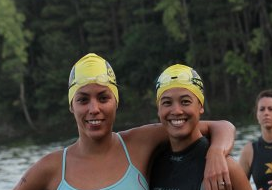 I was so dead set on my training and racing schedule I didn’t consider other people’s schedules.  I twisted and twisted Shannon’s arm into doing Square Lake with me and it was so much more fun because of it.  She did really well too!  I was much more impressed with her race than with mine.  Next year, I resolve to do my arm twisting earlier and get people to race with me.

Too many races become distracting.  Constantly having a race coming up was stressful.  I never felt like I could hold a consistent workout schedule because my training goals kept moving.  The May Tri made me absurdly anxious about the late spring, Trinona’s hill kept me preoccupied for most of the summer, and then before I knew it I felt like was staring Superior Man in the face.  I need a different method. 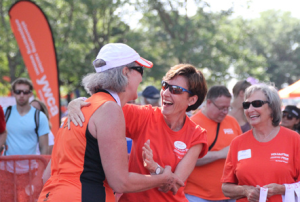 6 – Volunteering can be more rewarding than racing.

I am more proud of being on the team of Lead Volunteers for the YWCA Women’s Triathlon than I am of all of my racing.  Pursuing individual achievement is great because you don’t depend on anyone else for the result, but success can be  lonely.  Volunteering is so rewarding because it takes a sustained team effort for a successful race.  I get to provide the kind of race that I love for women who deeply appreciate the experience, and I get to celebrate with the team of dedicated volunteers.

I planned the dickens out of Superior Man.  So I figured I didn’t have to think too much about the races I was doing just for fun.  I spent the entire day before Women Rock walking around the State Fair.  I ate mini donuts that were so good they must have been  coated in crack-laced sugar.  Before Square Lake I ate a $2.00 frozen pizza.  Neither of these food choices turned out to feel so good the next day.  It wasn’t until the morning of Women Rock that I discovered that the starting line was about 5 miles further away than I had planned.  I had to bike a furiously fast 12 miles to make it there just in time for the start.

So here are the lessons for you 🙂 Register for really fun races with me (or a friend of your choice).  Plan on volunteering for at least one race each season.  Plan and train, and plan and train and then plan on it not going perfectly.

This entry was posted in Fitness and tagged athletics, fitness, racing, training, triathlon. Bookmark the permalink.

5 Responses to 7 lessons from racing