On day three we decided to make an igloo.  It would be a fun way to spend a layover day.  We were optimistic.  Years ago I bought this thing:

We watched all the videos and did all our research. It was so promising.

We’d tried and failed three times in past years.  This time would be different.  We had tons of fresh snow and ALL day to work on it.

After a leisurely morning we were ready to start the igloo.  First we packed down the floor and let it set.  Then Will assembled the pieces and staked the guiding pole to the center of our circle.  We began to fill and pack the form.  Immediately there was frustration and cursing.  Three blocks in and it was looking doubtful.  Then it started to click and block after block we were ‘glooging!

Our system was that Will managed adjusting and packing the plastic form.  I was just the labor, I shoveled the snow.  To get the snow to behave as a block it required mixing.  Despite pristine lake snow it had different layers that had different consistencies.  Before scooping and dumping I would mix the fresh sticky powder on top with the sandy snow on the bottom.
Between mixing, scooping and delivering I was establishing my path and ledge.  From our past experience I knew that in just a couple of rounds the walls would get too high for me to reach.  So I was building a ledge around the walls so I would be able to step up from the ice floor.  By the second layer of blocks I was breathing hard and sweating through my layers.  By the fourth layer of blocks it was getting pretty hard.  I would squat to scoop and lift 20-30lbs of snow and shovel.  Then step up on the ledge.  Precariously lift the shovel high and holding on tight rotate the scoop to very gently deliver the snow to the form.  Repeat three times to fill one block.  It felt like the ultimate test of my fitness.

Nine foot diameter igloo made for a lot of blocks.
It was around 3pm when we reached layer six.  The angle changes and it’s quite high.  It took a while just to figure out how to make it work.  There was much less shoveling to be done.  By 4pm it was almost done.  We had been working nearly non-stop for over 6 hours.  It had felt harder than doing SuperiorMan.  With 45 minutes until sunset I felt we could do no more.  We crawled in our incomplete igloo and I burst into inconsolable sobbing.

“Honey, look at our awesome igloo!” He tried to comfort me.
“I’m deeply cold.” I said as I put my head in his lap.
“Are you shivering?”
“ummm. no….” but I was.
“Are your base layers damp? Where did you put your other layers?” Will asked.
“It’s very quiet, where are the birds?  My clothes are in my ears.  I’m very tired, let’s take a nap.”

Will ticked off his mental check list “dehydrated, yup.  Probably damp.  Low mental acuity.  Shivering, and super tired.  Yup she’s a little hypothermic.”  I had worked very hard without enough to eat or drink, and then stopped moving.  Getting very cold had snuck up on me.

So he made me run around the igloo and then quickly made a fire while I started eating snickers.
After much sitting around the fire, lots of hot water, and eating I felt much better.  But not about the igloo.  I kept eyeing it and admonishing it for being a “bad, bad igloo.”  We slept in the tent.

I slept fitfully with stiff and achy muscles.

The next day was wonderfully mild and we took a little day hike.  That night would be our last and we figured we should sleep in the igloo even if it wasn’t finished. 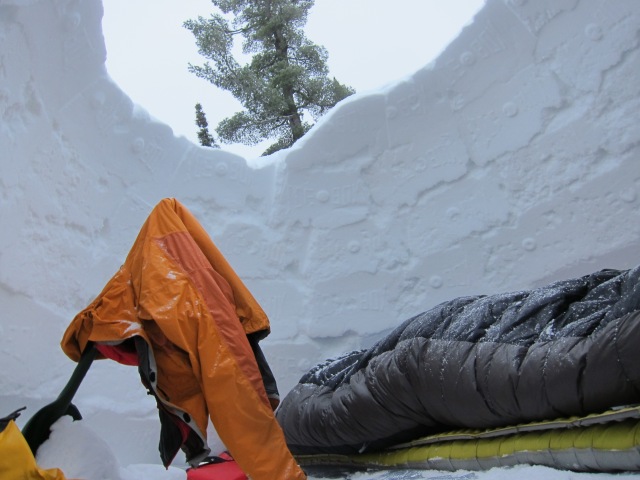 Day five of our winter camping adventure we packed up and began the trek to the cabin.

We couldn’t have been more delighted to bask in such luxury.  Water that didn’t require chopping ice and boiling.  A fire that required no sawing or splitting of wood. 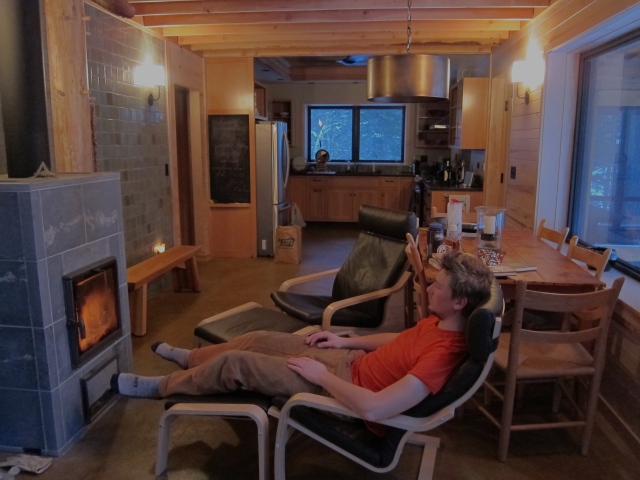 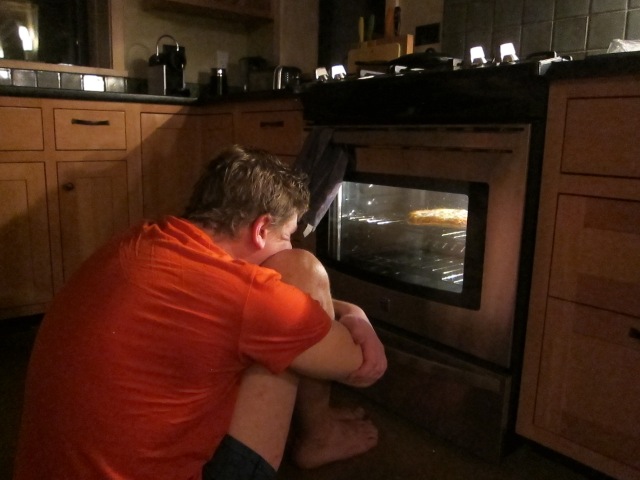 The igloo was the great Type 2 fun that was just miserable enough to make for a great story.  It also made the Type 1 fun of the cabin that much sweeter.

Next in the winter camping storyline: Learning to Love Winter