“Why is she so happy?” A friend asked Will.

Generally friends and family would not be dismayed to see me smiling.  They may have been less puzzled had I looked more haggard.  Will had been texting them my progress in the Beach2Battleship Triathlon for the last eight hours.  I had raced 114.4 miles and not much of it I’d call easy.  I had faced icky salt water, imaginary sea creatures, ferocious swimmers, and wash tub waves in the swim.  I had overcome discouraging passing and an unfortunate headwind on the bike.

But it was too early to feel anything but happy.  I had my first marathon to run.  Anything but happy would be a worry, a worm of doubt, a downward spiral, the beginning of the end.  I was at over 5 hours away from the end.  So I was ecstatic.

I was charmed by the downtown Wilmington crowds.  I thanked every volunteer and police controlled intersection.  I was so relieved to be done with the bike.  To be out of the saddle, to be upright and on my feet.

My feet begged to differ.  Three miles in and my legs thought they were on mile 20.  “No worries, just warming up.” I thought.  By mile 6 and the turn around I was feeling strong.

For a while I had a run buddy.  When he walked I passed him, then he would run and pass me.  We chatted each time and it became another fun way to pass the miles.  We ran on the path along the twisty Green Lake in a lovely residential area.  We ran through the slightly industrial/suburban stretch, then back onto the adorable downtown main road.  Turned out our spouses were waiting right next to each other for us and we had a good laugh with quick introductions.

Then, just after the half way point 13.1 miles in I made a fateful decision.  I declined my run special needs bag with wool arm warmers and gloves.  It was still sunny and warm.  I was still feeling pretty good and running fairly comfortably under a 11min/mile pace.   Just a mile or two later and things began to unravel.

Heading out of downtown again Will saw my deteriorating stride.

He speed walked along side me.  It was a good distraction to chat about all that had happened while we had been apart that day.  Before I continued on my own I said,
“Things hurt, but I’m trying not to suffer.”
That became my mantra “Pain, not suffering.” I knew it was going to hurt.  It was supposed to hurt.  I had chosen this because I wanted the challenge.   If it had never hurt I would have wondered if I could have gone farther or faster.  But what I have learned and practiced from my coach/father, from growing up an athlete, from yoga, and meditation – is that it didn’t have to be suffering.   Physical pain does not have to be mental anguish.

Every aid station became a beacon of energy.  Each one propelled me to the next.  Because the course was an out-and-back I had already seen each one twice, and I had a favorite.  It was an under the sea theme and there were blue curtain back drops and jellyfish hanging from the trees.  Children were dressed up as fish and when I asked for water I was told to go to the anemone.  This young teen was covered in long pink balloons with plush clown fish poking out.  I took both water cups from her and exclaimed
“You are awesome!”
Immediately she responded “No, YOU are awesome!”
This time around it was getting dark.  The hanging jelly fish were lit up in blues and purples and now there was a machine filling the air with bubbles.

I was handed my glowing band (so runners were easer to spot in the dark) and then Will showed up on his bike.  I was so happy to see him and share this surreal experience with him.  I was slowing down and hurting more, but was almost to mile 20 when we parted.  Just 6 more miles – practically nothing right?  Which may have been part of my unraveling.  The last 6miles took 1 hour and 44min, a 17min/mile pace.

My run slowed to a shuffle.  The temperature was dropping drastically.  I really should have stopped for the wool arm sleeves 7 miles ago.  I drank the warm chicken broth at aid stations but could no longer stomach any real calories.  As I stumbled through another aid station a big black dude said,
“This is going to be the last time I’m going to see you, I feel like I’m going to cry!”
I was already past when that sunk into my brain.  He had cheered me on for the fourth time.  I wanted to hug him.  It kept me going for another mile.

My right leg was locking up.  I started to walk.  At first the walking felt faster than my shuffle of a run had been.   In the dark among only fellow racers I felt  “Yeah!  I still got this!  No shame in walking!”  Three miles to go.  I was heading back into downtown.

Walking snowballed into suffering.   I was getting passed.  I was getting very cold.  The walking was getting harder and slower.  I was clearly very uncomfortable and I saw it reflected in the faces of the volunteers and cops.  Their encouragement sounded more concerned and sympathetic than enthusiastic.
One nice cop lady asked “Need EMS?”
I said “No thanks.  I’m just very very tired.”  but I thought “I look that bad?”

As I entered onto the downtown main street packed with bars and people I tried to run again.  It was not happening.  I felt terribly awkward.  I did not want to be on display hobbling slow and gross.   It may have been different if I had planned on walking.  Maybe I could have enjoyed the crowds.  But this was not how I had imagined my last two miles.  I had been holding back tears but now they were just streaming down my face.  Which only added to my embarrassment.

Finally I turned off the main strip to the river boardwalk.  Less than a mile to go.  There were racer’s families, and finishers in their pajama bottoms.  They understood, they cheered me on.  I still felt bedraggled as I turned the last corner.  I heard a man use a coaching voice say,
“This is where you run.  You got this!”
I ran.  It was gimpy, but it sunk in that I was really there.  This was it.  I saw Will with the biggest grin on his face.  I saw my time, 13 hours and 33 minutes. 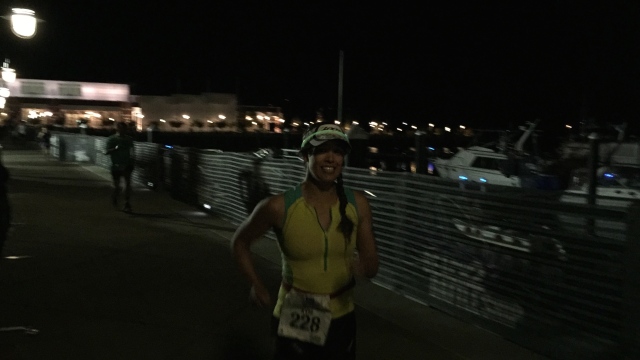 I ran across the finish line smiling.  I fell into a volunteers arms sobbing.  She hugged me in the mylar blanket, walked me to my medal, and my finisher pajama bottoms.  Sniveling though tears I thanked her and apologized for being so gross.  I was covered in layers of salt, and pee, and the energy drink, chicken broth and Coke that had missed my mouth. She was the perfect mother figure – I’d like to thank her on behalf of my mother.  She stayed with me until Will came.  I don’t think I’ve ever been so happy to see him.

We hobbled over to the heated medic tent where I sat down for the first time since 7am.  They gave me hot chocolate.  Will took off my soaked shin sleeves, socks, and shoes.  I changed into warmer stuff and my new pajama bottoms.  Eventually we collected my bike and hobbled back to our apartment.  I was too tired to celebrate.  That would start the next morning and would come in waves over the next weeks.