This is the fourth installment of Will and I’s adventure paddling honeymoon.  The first was A Beginning followed by Preparations and Before and After, thank you for following our journey. 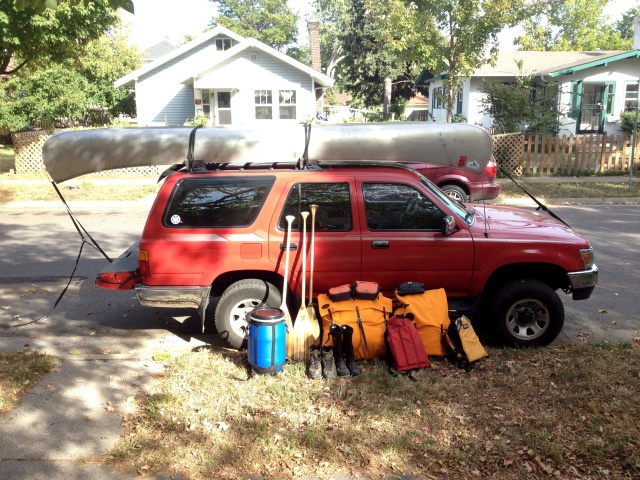 All packed the day before. This was our beloved new wedding vehicle.

It was still dark as we pulled away from home for our honeymoon. My stomach was in knots as I sat in the back seat patting down pockets and running through every mental list searching for the item we must have forgotten. This felt much bigger than the wedding. It strangely felt like a much scarier or at least more immediate commitment. All the planning and packing and experience couldn’t predict exactly how this adventure would go.

Honey! That’s what I didn’t pack! It hadn’t been on my list, but my new husband was sick and I was suddenly gripped with the need to be able to put honey in his tea. I announced to the men in the front seat that when we stopped, I’d like to see if I could get honey packets at a McDonald’s. Wills childhood friend Jay was driving up with us and would take our new ’94 Toyota 4Runner home. While we would be paddling along the Canadian border he would fulfill his wedding present to us, replacing the rear springs. Later while at a pit stop I sighed restrained stress at their being no honey packets. As we drove on Jay tossed back a squeeze bottle honey bear. I was surprised and elated and touched. He had purchased it in the gas station. Satisfied and relieved, my stomach untwisted one coil as I braided my hair. 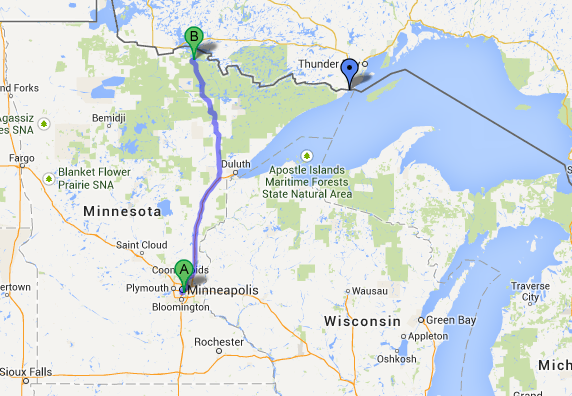 Driving from Minneapolis to International Falls MN where we put in.  From there we paddled the Canadian border.  The blue pin on the right is Grand Portage where we would end our journey.

At 1:15pm we arrived at Lake Kabetooama on the western side of Voyageurs National Park. It was about 65 degrees with scattered showers. We unloaded into the Black Bay Narrows. With nothing left to do but start, Jay took a couple of pictures and we were off! 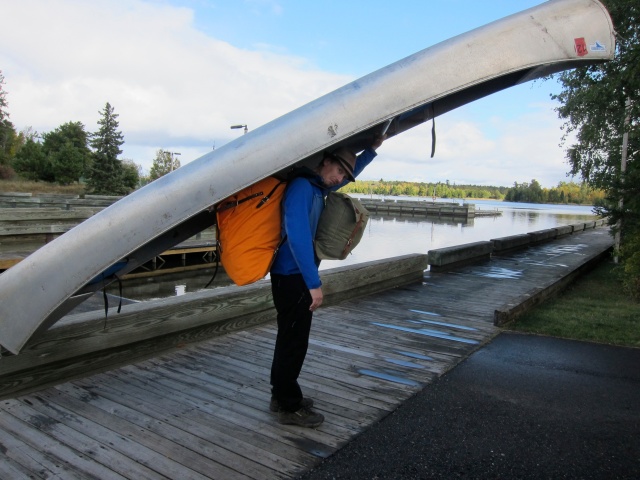 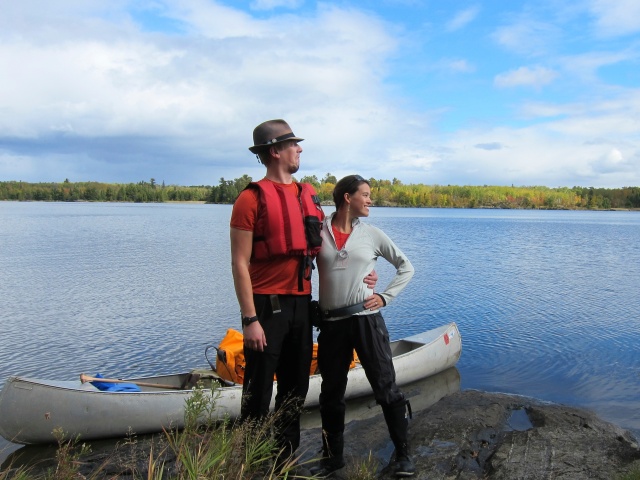 An hour into paddling my stomach completely unwound. It felt good to be in the woods and on the water. It felt good to be alone together. We paddled a peaceful eight miles, made camp, and ate beanie winnies for dinner.  Later I’ll post details of my meal plan. 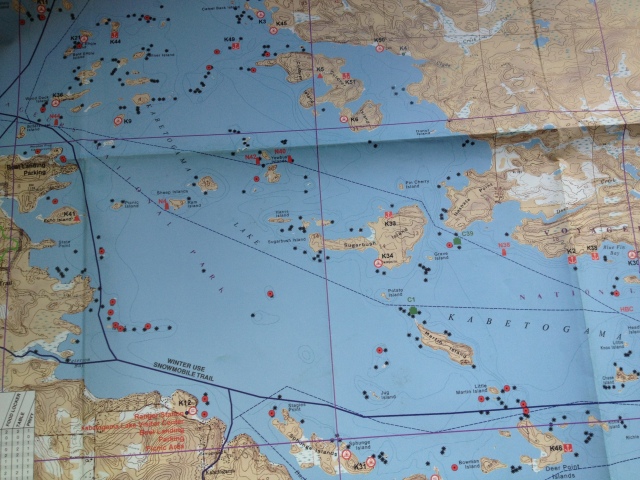 If only I could draw on my pictures.  I’ll learn someday.  We put in at the boat launch on the upper left (near the fold crease), we made camp at the red and white circle on the right edge of the picture.

Our first breakfast were our last cookies. We got on the water at 10am after sleeping in. It was a beautiful sunny day with a light west wind. 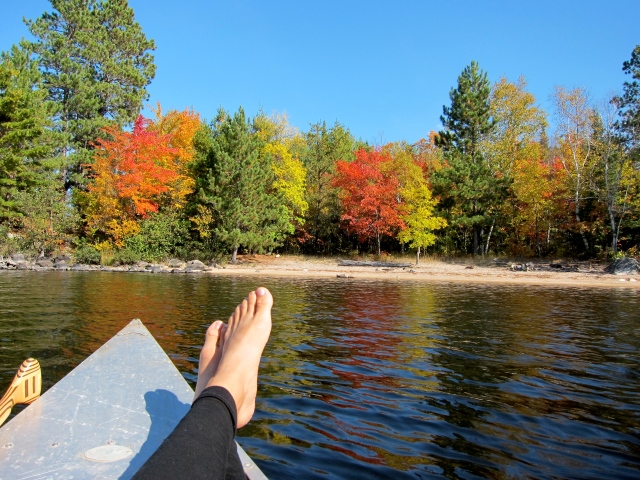 Lunch in the boat with a view

With easy paddling we had traveled far enough by 4pm and were eager to make camp at site we had used before.  When we found it occupied by motoring fisherman our arms suddenly felt much heavier. The next camp was a good hour away. It would get us to 22 miles for the day. As we made our way to Williams Island for the night we agreed that the motorists should have offered us beers. 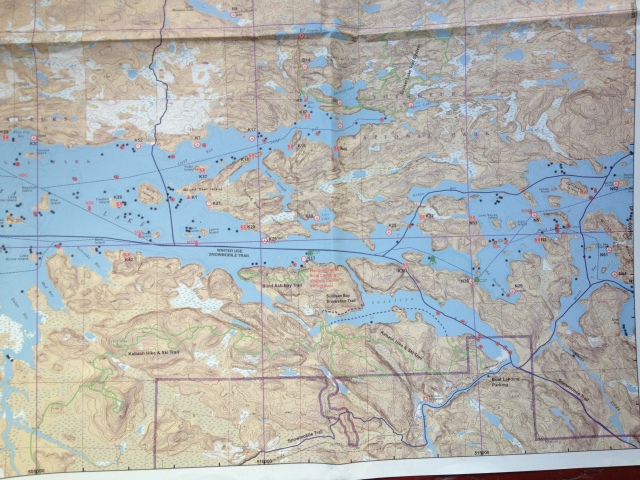 Day two: from the northwest red/white circle campsite to the farthest southeast campsite in the picture. 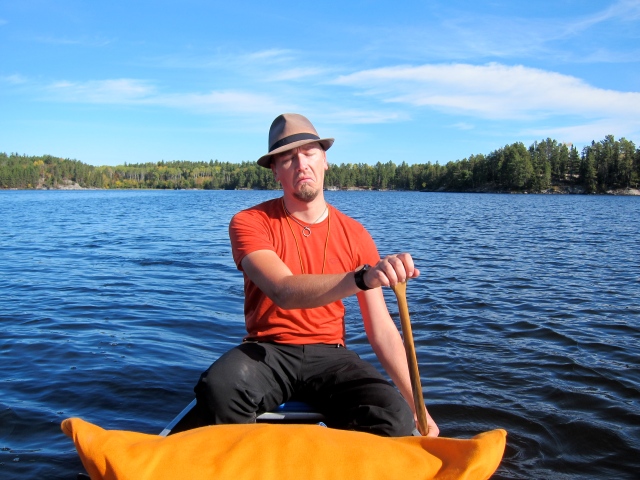 It was only the beginning of what would become absolute fury at motorists in Voyagers.

4 Responses to And we’re off!