Finding achievement in a simple salad

This salad is a testament to my years of culinary curiosity.   When I was in my early 20’s fresh out of the dorms I recall having about 3 “meals” I could cook.  They all included canned diced tomatoes and includes dolled up ramen.  To this day I fall back on veggie and protein enriched ramen as my go-to comfort food.

There was no great excuse for my sad repertoire.  I grew up watching my dad cook.  We watched the food network.  We weren’t foodies.  Eating and food exploration were just family values.  Oddly though, I never felt totally free to experiment in Dad’s kitchen.  In Mom’s that’s all there ever was.  Often I got to tinker up my own meal.  I learned about flavors, but never anything that could even remotely be served to anyone else.

In my early twenties I set out to learn to cook.  It felt like a necessary step towards being like a real adult.  If only I had felt the same way about my personal finances…    My goals were straight forward.  I wanted to be able to cook different types of things with different flavors from different ethnic backgrounds.  It didn’t have to be fancy or super authentic, just diverse.  I wanted to be able to cook with out a recipe.  Before I could do that I became a recipe hunter.  It’s been 10 years of a culinary journey.  From uber tested recipes from the Food Network and the Splendid Table to a lover of many food blogs, to my Turducken masterpiece.  It was an adventure I’d like to tell you some time.

All of it cumulates to this salad.  I found no recipe, I had no template, I imagined and experimented and it worked.  It’s not a masterpiece but it feels just as rewarding.  It is so far from what I ever could have imagined ten years ago it feels like wild success.

I haven’t shared “recipes” here because they aren’t tested.  All measurements are guesses.  Often I’ve made them a handful of times over the years, in this case only once.  I hope they serve as inspiration.  For the tentative cook I hope it sparks desire.  For the confident one I hope you get ideas for your own version.

I started by boiling 1c of oat groats like pasta (in a lot of salted water) until tender and then draining the excess water.  I picked oats groats because they are high in protein, but are larger and chewier than quinoa, and sweeter and milder than wild rice.  While it got started I got to the fun stuff.

I used two roughly chopped peaches, a package of strawberries, the juice of one lime, a dash of salt, and 2 Tb of sugar, in one big glass bowl.

Went to town on it with the potato masher until it was a lumpy puree.

Chopped one large bunch of dino kale (aka lacinato) into roughly 1 inch pieces.  I added it

as soon as I could and mixed and mashed it into the liquid so it would tenderize in the acid of the fruit.  Seriously I really smooched it down there with the potato masher.
I finely diced 1/2 of a red onion and added it.  I added the oat groats and drained and rinsed white beans.  Don’t skip this step or it’ll be too beanie.

All mixed up it was delicious.  It holds up for many days and travels well. 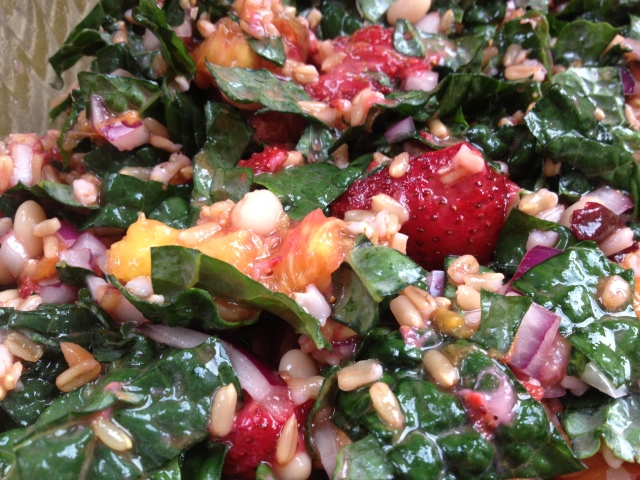 What has been your simple something that with perspective feels like an achievement?