Imagine a honeymoon in the pristine north woods. Deep clear lakes ringed with low sweeping cedars, majestic white pines, and dancing gold aspens. Secluded, peaceful and potentially very romantic. Which I suppose it was until day 13 and 183 miles in. Replace the deep clear lakes with low mucky water and rocks. Replace the green and gold forest under a blue sky with burnt stubs under a grey sky. 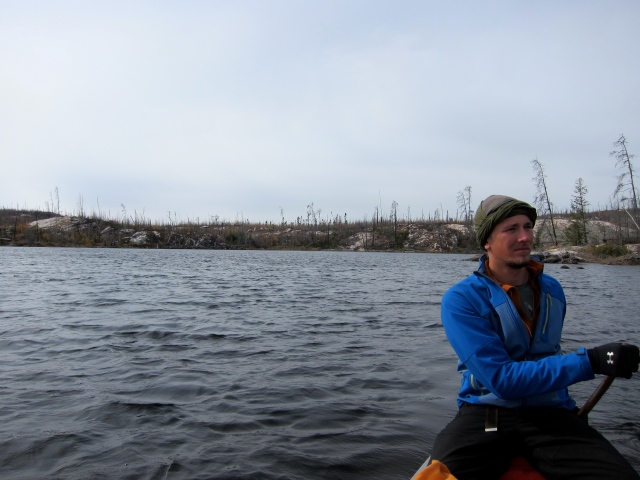 The day started out beautifully. Lake Saganaga had some of the most beautiful trees with outcrops of smooth rock shore. Then we entered into a monumentally depressing landscape. The forest had been burnt to stubble that looked like it could have been the end of the earth. Five years after the May 2007 Ham Lake Fire 75,000 acres are still mostly brown. People, be responsible, considerate campers, lest Smokey the bear terrorize your every outing. He will rip through all your nylon, scatter all your food, and haunt your dreams.

The day progressed through 9 hellish portages. Portaging is how you move from one lake to another, or how you get around something like a waterfall. The distance is measured in rods which is 16.5 feet, the length of a typical canoe. Often it’s the length of a portage that people groan and brag about. Sometimes they are extremely short, maybe just 4 rods. Grand portage is 2720 rods which is 8.5 miles. On this day, it was the quantity of them, not the distance that was crushing. On a good day even a short portage requires:
– Not falling in the lake while getting out of the canoe.
– Hefting heavy cumbersome packs out of the canoe, without dropping them in the lake.
– Loading these bulky packs on front and back, then picking up the paddles.
– Will adds the canoe to his shoulders after his two packs.
Now walk anywhere between 30 feet to a mile over rocky and rooted terrain without being able to see your feet.
Reverse the previous sequence without falling over or dropping anything anywhere.
Nine portages really add up.

One of which was mud.
What looked like lake before the mud, was just really shiny, thin mud. 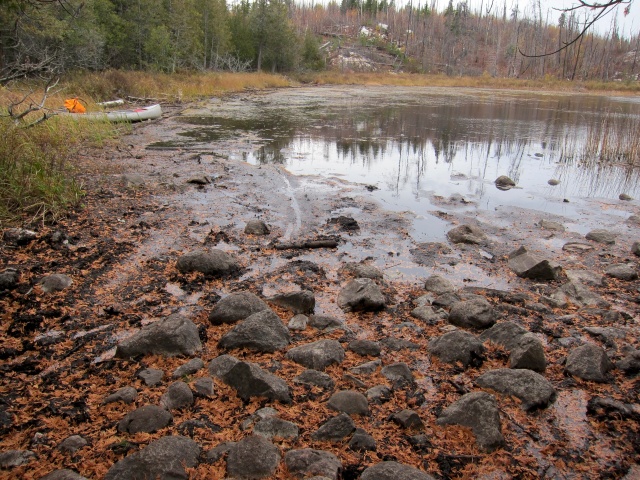 See those canoe tracks? I envy the people who had the good fortune to be able to make those.

About 10 feet before the supposed shore we stopped. It was too thick. Will brightly told me to hop out and scout the portage. Glowering I poked my paddle down into the mud and it sank right up to my hand. I poked some more trying to feel for anything solid to step out onto. Tentatively I stepped on to some submerged branch or rock. Progress was slow as I furiously poked for each step in the sucking mud.
“Hurry it along now,” Will sweetly urged from the canoe.
I screamed, “I’m going to drown in the mud like a mule!”
In near tears I finally made it to the reedy shore. By the time I had determined that yes, this was the portage and how the hell was I going to get back to the canoe, and then get it out of the mud, I was alternately muttering and yelling “fuck fuck fuck FUCK FUCK fuckfuckfuck…”

Several portages later we found ourselves with even less water. From the algae lines on the rocks it looked like the lake was four feet lower than normal. It entirely changed the shape of the shoreline and made navigating extra difficult. We couldn’t find a portage. Finally we deduced we would have to trek over the rocky lake bottom to get to the portage. 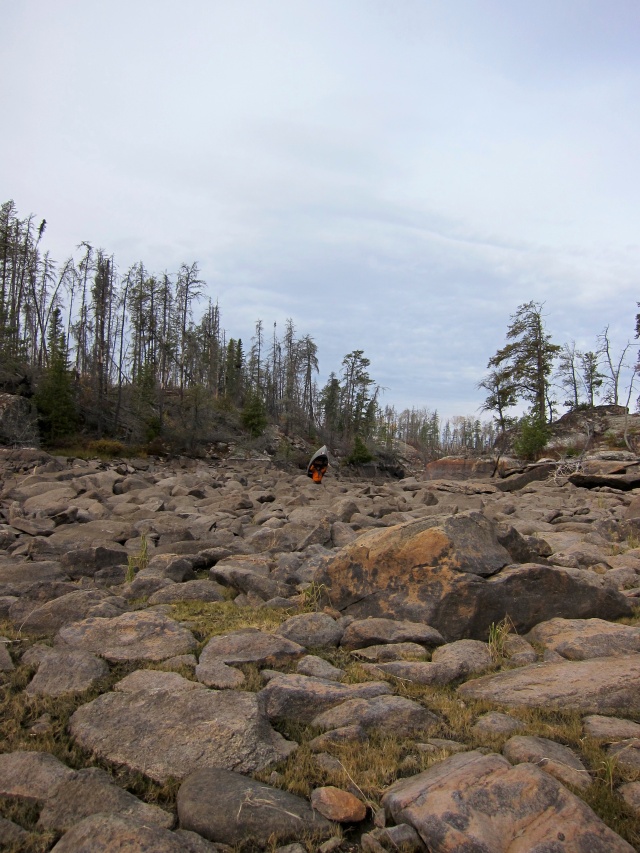 Will is that tiny orange speck under the silver canoe.

It had taken extra scrambling to figure out where we were. Then two trips across the rocks with the gear.

By the end we were just thankful to find a campsite with trees.
We felt seriously destroyed. 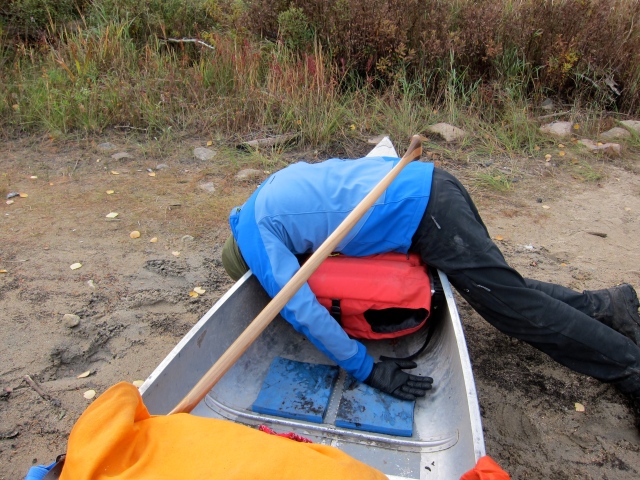 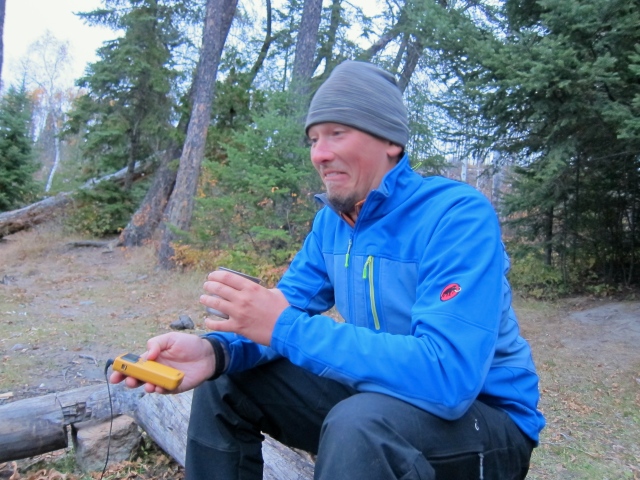 This is Will’s delightfully amused face.

Although nothing that a little whiskey and bluegrass can’t perk up.
Our little weather radio managed to get the public station out of Ely.

It had been a seriously comical type-2-fun kind of day. So much misery is terribly fun in retrospect. We got through it with hugs, swearing and tearful laughter. By the end of the day we agreed it was a ridiculous honeymoon.

Next installment: Rain, tears, and tea on the Gunflint.

The story of our honeymoon adventure starts with A Beginning.

6 Responses to Bluckville in Portage Hell