They started out so sweet and innocent. Simple homemade peanut butter chocolate candies.  The original recipe (Smitten Kitchen) makes them look so elegant.

But for Halloween 2012, in my hands they developed adorable eyes.   Which was what my original buckeye recipe post showed.  The mutating started very slowly, at first with just a couple developing a simple slit for a mouth. By 2014 they had taken on whole new characters.

2015 was the first sighting of blood and knives. Things escalated quickly from there. 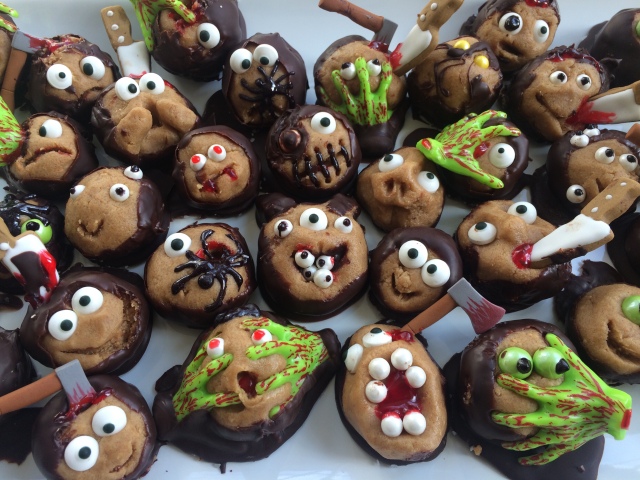 What I do know is you should invite these little characters to your Halloween.

Here is my updated recipe in orange (which this year I’ll make a 1.5 batch, because, well.. they’re out of control).

Decorations:
The knives and axes are a sugar candy made by Wilton.  They are rock hard and not tasty, but are edible.  They eyes are a variety of sugar candies and are more edible.  The gel decorating icing seems to work best for me.  The green hands are just plastic (reusable!) but people apparently kept biting into them and didn’t like them.

Make the filling, a day or two before assembly.
With an electric mixer (I used a hand held one) in a large bowl, beat the cream cheese and peanut butter until well combined.
Add graham crumbs, beat briefly.
Add salt, both sugars, butter, and vanilla and mix on the lowest speed until the powdered sugar stops floating off everywhere, then increase the speed until everything is well combined. Scrape down the bowl as needed.
The mixture should be stiff and a little dry, which is good for shaping.
Put filling covered in the fridge.

Make the chocolate coating.
There are all sorts of methods for tempering chocolate so you get that glossy crisp chocolate coating that doesn’t melt all over your fingers. I am lazy and have no problem with a matt finish and chocolate fingers.  In a broad shallow bowl, I microwave the chocolate for 30 seconds, and then for 10 second increments, stirring in between until it’s fully melted. I let it cool for a bit so I get a thicker coating.

Assemble the treats.
Do this with one or two friends.  You need reinforcements 😉

Line a sheet pan with parchment paper (wax paper would do, you’re not going to bake them.)
Generously sprinkle salt and toffee crumbles on the paper.

Take your refrigerated filling and scoop anywhere between 1t and 1T and roll into a ball (or whatever your little buckeye’s want to be).
I use chopsticks and a spoon, but you might use a skewer and fork or find your own method. Like pancakes, the first couple will probably not be your best. Dip them in one at a time, roll around until most of the ball is covered lift out and place on salt and toffee covered paper. Don’t stress about “ugly” ones, they’ll look even better for Halloween. If it takes a while to get your dipping method down you might have to reheat the chocolate in the microwave again.
Let them evolve 😉
Chill until chocolate is set, at least 30min.
I make them the day before my Halloween party.  I just leave them on trays on my three season porch.

Any extras keep just fine in tupperware in the fridge.