Things Not Done – A Story of Progress.

I’m pretty good at getting stuff done.  Most of the time?  Sometimes?  I’m also very good at not doing things.

In doing this, I saw two years of photos of my giant whiteboard project lists.  I saw how many things I didn’t do, either at all or on the original timeframe.   Normally this makes me desperately despondent.  I’d be crushed under the impossible weight of undone tasks.  Or I might decide that “None of it really matters. It’s hopeless so why even try?”  Then pretend to be content spending the day in bed.

But not this time!  I am defiant in the face of the zillion things still not done!  Gosh dang it, some things did get done.  There has been progress.

Will and I are starting our own education business!  Our launch party is this January 19th. There will be more announcements and information coming soon.  They’re on the list.

In the meanwhile I thought I’d share the two year story of how we got here with some of the lists of things not done (and some stuff that did).

January 2016, Will and I had both been at our jobs for over 5 years and we were not happy.  Things had not panned out the way we had planned.  We needed to turn the ship around and change course.  I only had the vaguest notion that once upon a time, I had my own program coaching youth and it was awesome.  I wanted to do it again.  Only better.

April 2016
Will got me a giant whiteboard for my birthday.  Nothing says “I love you” like quality office supplies.

May 2016
Nine things on this whiteboard never happened.
Eight of these things did get done, just one whole year after they were scheduled.

It also got used for other types of planning…
Will and his brother Pete were  sketching mountaineering rope set ups.
My additions were on the right 😉

June, July, August 2016
None of those six projects got done during those months.
None of those ten business names stuck.
None of the six mission statements stuck.
I did make the last three payments from my ER visit from 2015.
All five of the value words have stuck.
One out of eight taglines stuck.

September, October, November, December 2016
There is no picture of what projects were on the board, but I can be pretty certain they didn’t happen either.  Instead, I dumped all my energy and time into applying for Bush Fellowship, which I didn’t get.
The whiteboard photo was a sketch of a full day youth workshop.
This project also did not get done.  Although it is not forgotten and it will be coming back to the board in February 2018!

January 2017
Something got done!  We have a name.  Zest Ed.  Like phys ed, community ed, special ed… it’s our own brand of  education.   It will revolve around our personal love of athletics and wilderness travel.  As well as our values we came up with in June of craftsmanship, mindfulness, synergy, grit, and play.
We didn’t have a logo for the next year.

February, March, April, May, June 2017
I turned 35 and felt like I’d been stuck spinning my wheels in adulthood for the last 10 years.  Things not done:

I sketched adult athletic education workshops.  We made that happen twice.
I searched for and applied for jobs.  That didn’t work out.
I did go to the intro series of classes at Women Venture.

July, August, September, 2017
Sixteen things still not done. But screw it because, OMG thirteen things did get done! Four more were in progress.  Oh, and I graduated from the Women Venture class. 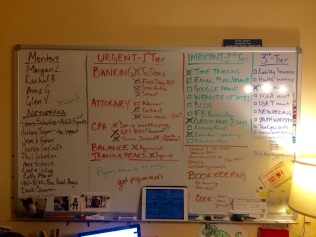 October, November, December 2017
Fourteen things still not done.  But I was giddy with the ten things that did get done and the four more in progress.

January 2018!
A fresh new board.   A new chance to not get things done, and in that process get shit done. 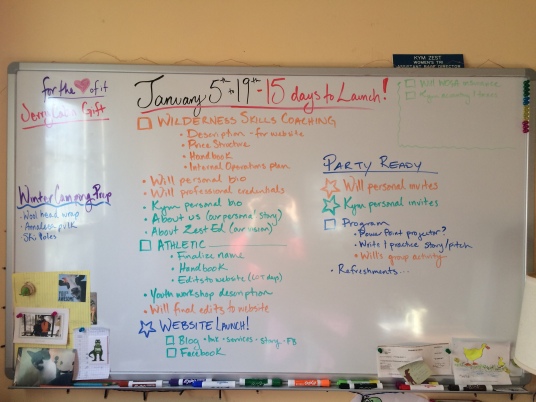 This entry was posted in Enterprise and tagged becoming an entrepreneur, checking things off, doing nothing, getting shit done, lists, reflections, things not done. Bookmark the permalink.

2 Responses to Things Not Done – A Story of Progress.