She Shoots! She Scores!

Well, I’m not sure I hate it, but I’ve never had what I think of as a “runner’s body.”  Running has never come easy to me, which was made even more plain when I married a runner in my 30s.  And not only a runner, but a New-York-Marathon-runner.  For years, no matter how badly I wanted it or how many “couch-potato-to-5-K” plans I tried, I just couldn’t do it.  I’d get too winded.  My feet hurt. My shins screamed for rest.  And I felt like a total idiot — flopping along the city lake paths with my bright red face, breathing like a buffalo, hoping to God no one would recognize me.

When I decided to train for the Minneapolis YWCA Women’s Triathlon last year my most significant insecurity was the running. I’m a capable swimmer, and a seasoned cyclist, but the running — that was going to be a challenge. No, that was going to be hell.  But, as famed hockey player Wayne Gretzky once said: “You miss 100 percent of the shots you don’t make.”  So, I decided to give it a shot.

Coach Kym was gentle – starting with stretching and exercises first that would prevent injury.  Then came the drills to set stride and experiment with different speeds.  Then came the run/walk work-outs.  My body put up a good fight.  First, it was the shin splints.  Then, the dreaded plantars fascitis.  Work outs were adjusted, rest time expanded, anti-inflammatory measures taken.  And I kept going.

On race day the weather forecast was 93 degrees with epic humidity.  The forecast didn’t disappoint. 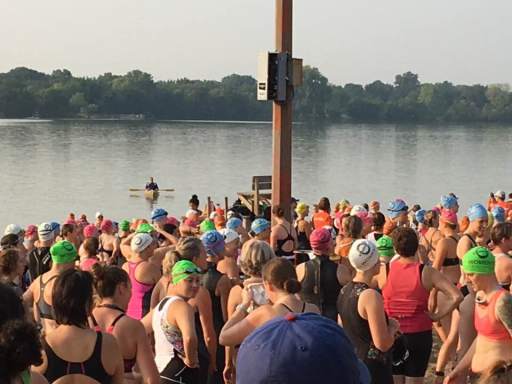 Waiting with nearly 1,400 women to start the YWCA Women’s Triathlon

By the time I got on the running path (the third leg of the triathlon) it was piping hot.  My head was swimming, and just where were those water stands?!  I kept going.  I finished.  I even made my B-goal-time (Kym had me create A, B, and C goal times for each portion of the race). 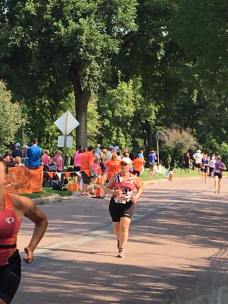 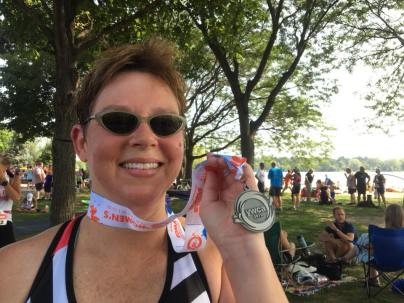 In truth, I ran/walked.  Okay, I mostly walked.  But I ran some of it. At the start of my training I imagined myself by race time as a seasoned runner – gliding along the course in a snazzy Lulu Lemon one-piece, prancing like a trick pony at the State Fair with a runner’s high.  Not winded. Smiling, laughing, having a ball and enjoying the experience and the joy of life.  I had taken my shot, but that particular goal I did not make.

In our post race debrief, lamenting to Kym, she told me that for some people, it just takes longer. She walked me through how far I had come, itemized the year’s accomplishments, and put things in perspective.  It’s just going to take longer than I thought to be a “runner.”  Or, at least, “someone who runs/walks.” 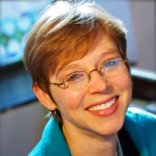 Devon Anderson has been an Episcopal priest for 21 years and is currently serving Trinity Church in Excelsior. Minnesota.  She lives in Minneapolis with her husband and 15-year old son.  Her daughter attends Boston College.  Her family has two dogs, one very bad cat, and three chickens. You can also read Devon’s Zest Ed athlete bio and her “Claiming The Hidden Wholeness” post.

1 Response to She Shoots! She Scores!