I confess, I have had strange race dreams that I never disclosed here.   They’ve made funny stories but I never thought much of them.  Until one of them took on a life of it’s own.  But let’s start with this one…

I arrived to see the transition area was in an arena.  Like the Roman Colosseum.

Other than the architecture  it seemed normal enough with rows of bike racks.  So I set up my bike, helmet, shoes, along with the rest of my tri gear.  I left to get my chip and body marked and when I got back water was rising.  They were flooding the arena!  My cap and goggles began to float away.  I found myself swimming through chest high water to retrieve my helmet.  I was figuring out how to keep all my stuff in place when my little blue tempo trainer came floating to me.
I woke up.
Earlier that season I had lost my tempo trainer on a practice swim in Lake Nokomis.  It had been a sad day feeling like Tom Hanks losing Wilson in Cast Away. 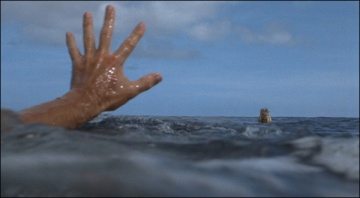 Some of my triathlon clients have had pre-race dreams.
Kate arrived to a race and her assigned transition spot was in a tree.  Up just overhead in the crook of the trunk.  Without freaking out she went about trying to get her bike and gear to stay up in the tree.  Her helmet was supposed to be unclipped and ready to put on.  But the only way to get it to say in the tree was to clip it up there.
Andrea was all set to start the race.  The gun went off, and racers proceeded to swim through abnormally thick pudding like water.  Then everyone stopped, retrieved their floating Scrabble bags and proceeded to play Scrabble by themselves.  A judge would approve racers use of all their tiles before they could continue with the race.  While other racers completed their words and took off, she was beyond frustrated.  Her scrabble tiles kept floating away.
One dream occurred over three years ago has taken on a life of it’s own.
In real life I am the Assistant Race Director for the YWCA Women’s Triathlon.  At the time it was my third year as a Lead Volunteer.  A lot of planning goes into an event for over 1,000 racers.  There are plans on top of plans, which is great.  I love plans.
On race day Lead Staff and Volunteers wear radios with ear pieces for the main venue to connect with the many miles of race course.
All is well when I hear “There is a dinosaur on the race course!”
This was not racers passing under a benign brontosaurus like a finish line balloon arch.  It was a full on Jurassic Park T-Rex chasing triathletes.
And I’m like madly flipping through our Crisis Plan screaming  into the radio
“We don’t have a plan for that!  WE DON’T HAVE A DINOSAUR PLAN!!!”

When I tell this story at work my wonderful boss and Race Director says it’s a perfect example of how my mind works.  I will worry about every scenario and when I’ve run out of real ones my mind will make something up.
I tell it to my clients.  Something will always go wrong.  There are enough pieces of the puzzle that something will go right, and something will get messed up.  It’s ok.
So the little inside joke of dinosaurs on your race course has been slowly growing.  At first it was just a retold story but recently it exploded.  Andrea bought a dinosaur transition towel.  At the indoor triathlon I cheered clients on with my own crayola colored dinosaurs.

Little did I know that these clients had planned the ultimate dinosaur surprise.  I walked into my office the day after my birthday to find this scene: 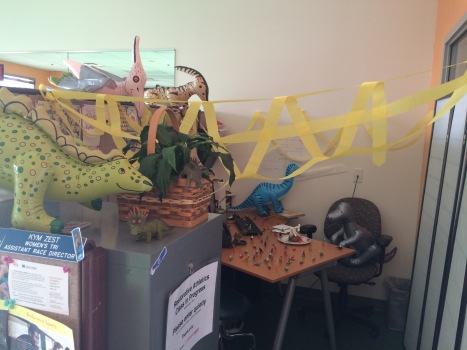 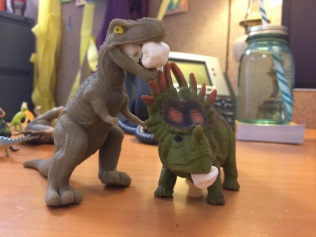 Things I’ve said to them.

10 hours later I discovered it wasn’t even over.  They had gotten my bike too! 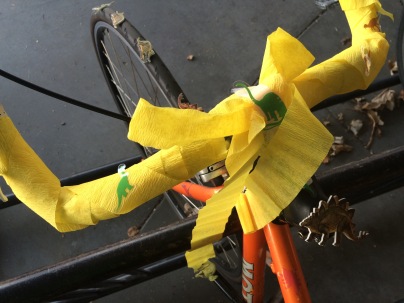 Dinosaurs on my wheels, on my lock, on my pedals!

I’ve never had so much fun with a nightmare.  I love my dinosaurs.